When you think about a lion on the prowl in the African plains, one of the last things you imagine is the king of the jungle tripping and limping away with an injured ligament. But it happens, and sometimes the same things happen to our animal companions at home. Yes, dog ACL injuries are more common than you might think!

Believe it or not, the word ‘Shih Tzu’ is a direct translation from the phrase “little lion.” You may be chuckling at that — okay, we did too, it’s cute — but the breed has earned its moniker over centuries of loyal companionship, dating as far back as being the pet of Chinese royalty during the Ming Dynasty.

One Shih Tzu in particular, a valued member of the Pets Best family, is Sandy. This “little lion” suffered a torn ACL in his mid-life, and much to his owner Bruce’s relief his pet insurance coverage helped for a prompt and full recovery. 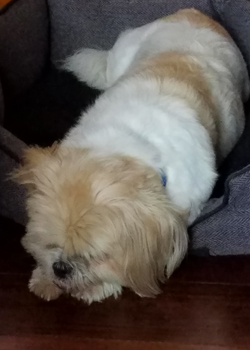 Sandy is 56 years old (8 in human years) and Bruce, recalls the day when he and his wife picked Sandy — or rather, when he picked them. While the other puppies ran around the room, Sandy sat in Bruce’s lap and found a new home shortly after.

Sandy matured with good health, but some ailments began to catch up with him as he entered mid-life. After Sandy experienced a painful impacted tooth, which would require an extraction, Bruce made the call to get Sandy covered under a Pets Best insurance plan. Then came the fateful day when his loyal dog tore the ACL in his hind leg.

Treatment and rehab for dog ACL injuries are tedious and require a lot of veterinary supervision, and thus, incur a lot of costs.

“The torn ligament, a cranial cruciate or ACL, required an initial exam and X-rays, followed by surgery to repair his leg using the “tightrope” procedure,” Bruce said. “The total on this procedure would have been around $2300 out-of-pocket without insurance.”

But with coverage in place, there was no hesitation in Bruce’s mind to get Sandy on the regimen to repair his torn ACL. What could have cost Bruce thousands of dollars in out-of-pocket expenses for veterinary and rehabilitative treatment was made an afterthought as Bruce and his vet focused their attention on Sandy making a full and prompt recovery.

Learn More: What Other Health Issues Does Pet Insurance Cover?

Like any dog, Sandy has undergone some unexpected changes as he’s aged, for instance, developing allergies. But so long as he remains that composed and resilient pup Bruce adopted 8 years ago, he should be good to go for many years to come.

When asked about the one piece of advice Bruce would offer to other pet owners, Bruce said, “Don’t delay going to the vet, treat the problem promptly and have Pets Best Insurance.” Of course, we love that answer on so many levels, not least of which is that it offers a fantastic path to a healthier pet. 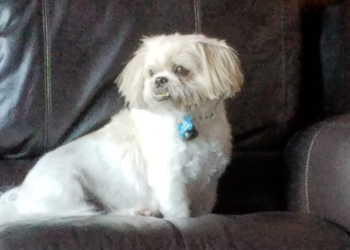