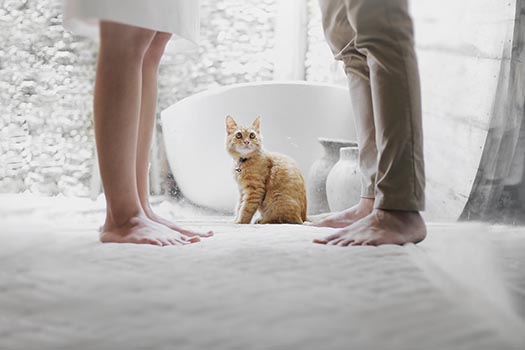 Getting a divorce or breaking up can get messy. For some soon-to-be ex-couples, the easy part is deciding who gets the house, the car, and the time-share. A more difficult decision, however, may be who gets custody of a pet.

How Pets Are Viewed By the Law

Unlike human children, pets are considered property under the law, and courts have only recently started to consider what is in the best interests of a pet when a custody dispute arises. While courts have always been involved in deciding the custody of human children, it was only in 2017 that Alaska became the first state to require courts to consider the pet’s well-being when deciding a pet custody issue in a divorce.1 Fortunately, for pets, other states have also made changes to divorce laws in order to look out for the family pets.

In 2018, Illinois enacted laws that consider the impact of divorce on pets.2 While pets are still considered property under Illinois law, the state allows a couple to agree on a custody arrangement that is similar to one for human children, including joint custody. In other words, the couple can choose to share custody of a pet and agree to specific terms of visitation and financial support. This way, one party of the separating couple won’t essentially lose a cherished pet. Even more significantly, if there is a dispute and a judge must decide issues of pet custody, the new laws require the judge to consider the pet’s well-being when deciding a pet custody issue.3 Of course, if the couple mutually decides the issue of pet custody, the courts are not involved. However, if the couple cannot agree, then the new laws provide guidance and more significantly, acknowledge the importance of the pet’s well-being in making such decisions.

Related Article:  Should Pets be Considered More Than Property Under the Law?

Most couples don’t anticipate splitting up, and certainly don’t think about pet custody issues when they are posing for wedding photos with their pet dressed in a tuxedo. However, if the couple is signing a prenuptial agreement, it would make sense to include a provision regarding pet custody. That may be a good way to avoid any future dispute and is not unusual at all.

The Importance of Pets

Notably, the shift in law regarding pets is not merely symbolic, but recognizes the important role that pets play in our lives. While they are still legally considered to be merely property, every pet owner knows that a pet is not the same as a television, the barbecue grill or jewelry. Because pets are viewed as property under the law, courts were hesitant to allow shared custody of pets to a divorcing couple because it would be as impractical as a couple deciding to share a television after a divorce.

More recently, courts are warming up to the idea that pets are a unique type of property that deserves special attention because of the emotional attachments that are created. While courts have not gone as far as treating pets the same as human children, there are definitely steps being taken to ensure that the well-being of the pet is considered.

If a separating couple cannot decide on pet custody, the court will consider many factors to determine pet custody such as:

After considering these factors, and may be even requesting a home study or evaluation by a third party, the judge will make a pet custody decision and include terms of visitation and financial support. It should come as no surprise, that in some cases, a judge will order financial support payments to be made if necessary, to maintain the care of a pet. A sort of alimony payment, or “paw-imony.” Clearly, this shift towards the recognizing the best interests of the pet is one that will benefit pets as well as separating couples.

When a couple separates, there are many changes that occur which impact every member of the family including the couple, human children, and furry children. For pets, a divorce may mean a new home, new routines, and loss of companionship and affection from very important people. During this time, it is important to observe your pet for any changes in behavior or signs of anxiety. When changes occur, with or without signs of anxiety, it is important to maintain as many old routines as possible. Also, establish new routines when necessary and make sure your pet feels comfortable and safe. If symptoms persist, or seem to be getting worse, make sure you bring your pet to the veterinarian for an evaluation.

Luckily, a divorce or separation does not have to mean the loss of a pet. On the contrary, you and your ex can agree on a pet custody agreement that will consider the best interests of the entire family, including the pet. Be creative and think of ways to ensure your pet remains happy and in contact with every member of the family. If you cannot reach an agreement, the courts may have to settle the issue of pet custody along with any other issues in dispute including distribution of assets and human children custody, visitation and support. Even if your state laws do not require a judge to consider the pet’s well-being in a pet custody dispute, you and your ex can provide information for the judge to consider when making important decisions regarding pet custody.

Related Article:  A treat is just a treat, or is it?

Ray Chao is a longtime writer and contributor for Pets Best Insurance. His writing on pet health and legal topics bring a wealth of legal experience, gained through his roles as an Assistant State’s Attorney in Cook County, Illinois, an Assistant Corporation Counsel of Manhattan, New York, and as an Adjunct Faculty of Law at both the Loyola University Chicago School of Law and St. Francis School of Law. Ray holds a degree in English and political science from the University of Illinois, along with a master’s degree in sociology from DePaul University. Ray later attended the Loyola University Chicago School of Law where he earned his Juris Doctorate (JD) and Master of Laws (LL.M). Ray and Dash, a Staffordshire Terrier, live in Los Angeles. Ray has been a writer for most of his adult life, and an animal lover for his entire life. He has written for various newspapers, magazines, websites, blogs and legal publications on many different topics including his favorite topic: our pets.
Read More
PrevPreviousHealth Warning Signs: Increased Appetite in Senior Pets
NextThe Dangers of Dogs Riding with Their Heads Out of the WindowNext